The DAIICHIKOSHO Group contributes to society in various ways through its core karaoke business and its nationwide chain of BIG ECHO karaoke rooms and other locations.

□Mobile karaoke boxes and music-oriented health and fitness sessions (Sing for Smile Program)
To support people affected by the Great East Japan Earthquake, DAIICHIKOSHO worked with the Friends of the United Nations Sing for Smile Program run by Friends of the United Nations Asia-Pacific. As part of health visits to temporary accommodation by medical groups, we set up mobile karaoke rooms and held music-oriented health and fitness sessions using the DK ELDER SYSTEM. (January 21, 2012 – March 31, 2017)

□Providing support through BIG ECHO karaoke boxes and restaurants
All the Group’s BIG ECHO karaoke rooms and restaurants collected donations and used a special Tohoku and Kanto Support Menu (April 2011 – August 31, 2011) to raise funds for people affected by the disaster. Roughly ¥19 million was raised and donated to the disaster-affected region via the Japanese Red Cross Society. Special BIG ECHO invitations were also distributed to people forced to live in temporary accommodation, giving them an opportunity to enjoy themselves and regain some motivation through karaoke.

Supporting the recovery effort after the 2016 Kumamoto earthquakes

□Health and fitness activities in common areas at temporary
In a joint initiative with Kumamoto Prefecture and NTT West, we introduced ICT-based music and health services for people in temporary accommodation. The services, which were provided in common areas called "Minna no Ie," supported resident health and fitness and helped to create a stronger sense of community. To provide some cheer to people affected by the disaster, we used our DK ELDER SYSTEM to run music-oriented health and fitness sessions for elderly residents. (September 2016 – October 2017) 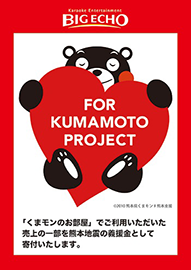 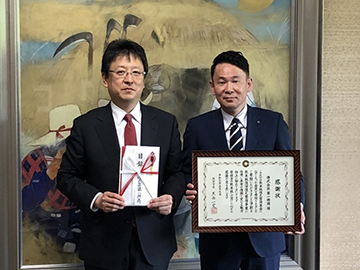 BIG ECHO karaoke rooms and CLUB DAM karaoke franchises have collection boxes next to cash registers to collect donations for people affected by earthquakes, typhoons and other natural disasters. Money donated by our customers is given to the Japanese Red Cross Society to pass onto areas affected by disasters.

During major disasters, many people are expected to have difficulty returning home due to the suspension of public transport services such as trains and buses. Working with local governments in Tokyo and other areas, BIG ECHO has registered its karaoke rooms as official support stations for people unable to return home during disasters. In the event of a disaster, all BIG ECHO locations will provide water, toilet facilities, rest areas, power points, WiFi access and information about available routes home to the public. In line with that policy, we have signed agreements with two local government umbrella organizations to provide registered stations for people unable to return home during disasters – the Shutoken Leaders Group – Disaster Prevention and Crisis Response Committee (comprising three prefectures , the Tokyo Metropolitan Area, and five cities ), and the Union of Kansai Governments (comprising eight prefectures and four cities ).

■Supporting the healthy development of children

□Donations
We created new food menus based on suggestions from university students nationwide and BIG ECHO staff, with a portion of sales (¥30 from each menu item) donated to HOUKAGO NPO AFTER-SCHOOL, an NPO that promotes safe and healthy environments for all children after school.

□Hands-on Music Programs
In early April 2019, we gave children the chance to take part in fun after school dance and song programs with Mii, an artist signed to the Group’s Nippon Crown record label. Around 40 children took part in the fun music events, which were held at two karaoke box locations.
The Group runs a range of music programs to support the healthy development of children.

To provide support for government-led efforts to change work practices in Japan, BIG ECHO launched a new Business Plan service at 27 locations in the Tokyo Metropolitan area in April 2017. The service allows customers to use karaoke rooms as workspaces for remote working and other out-of-office needs.
The convenience of the service proved popular with customers, prompting calls for it to be offered outside Tokyo. To meet that demand, we renamed the service Office Box and extended the network to 49 locations in April 2019 and then to all BIG ECHO locations the following October.